in NFT News
Reading Time: 6 mins read
A A

Chainlink [LINK] hit a thirty-day high of $8.80 and revitalized its NFT trades volume to a new high after it fell vehemently on the second day in November. Interestingly, these developments came after Chainlink announced new digital collectible integrations.

According to Chainlink, it integrated three NFT collections via its Polygon [MATIC] and Ethereum [ETH] subchain. Revealed through its “Daily Wrap-up,” the decentralized oracle network noted that ItsDigits, Sigma on Katlyn, and Gustaves NFT formed part of the latest alliance.

A tale of the fungible and non-fungible

According to Santiment, the NFT trades volume was $1.33 million at press time. The on-chain analytic platform also revealed that the spike in volume on 1 November decreased significantly in the last four days. Despite that, traders were able to rejuvenate their interest, especially as the volume at press time managed to beat the one on 3 November.

As for the price uptick, there was no denying that the volume also played its part. Santiment showed that the LINK volume had surged by 19% to $865.85 million. This rise meant that investors had chosen LINK as one of the cryptocurrencies to use for translations regardless of profit or loss. In addition to the volume increase, the supply on exchanges indicated that the LINK pump had led investors into trying to take profits.

As of this writing, the exchange supply was 174.74 million. With an increasing rate of flow, it was likely that LINK investors were in the mode of selling off what was gained lately. As such, LINK could be on the verge of selling pressure leading to an ease of the uptick. At press time, the signs were already starting to show.

Furthermore, CoinMarketCap data revealed that LINK’s price had decreased to $8.67 as an aftereffect of the exchange supply hike.

Per other parts of the Chainlink ecosystem, Glassnode had some updates in store. According to the on-chain platform, the Herfindahl Index was at a low value of 0.005. At that point, Chainlink supply concentration was moderately distributed across addresses.

In addition, this signified that the underlying LINK assets had balanced the weighted addresses on the network. Hence, Chainlink had opted to adapt to the demands of its decentralization objectives. 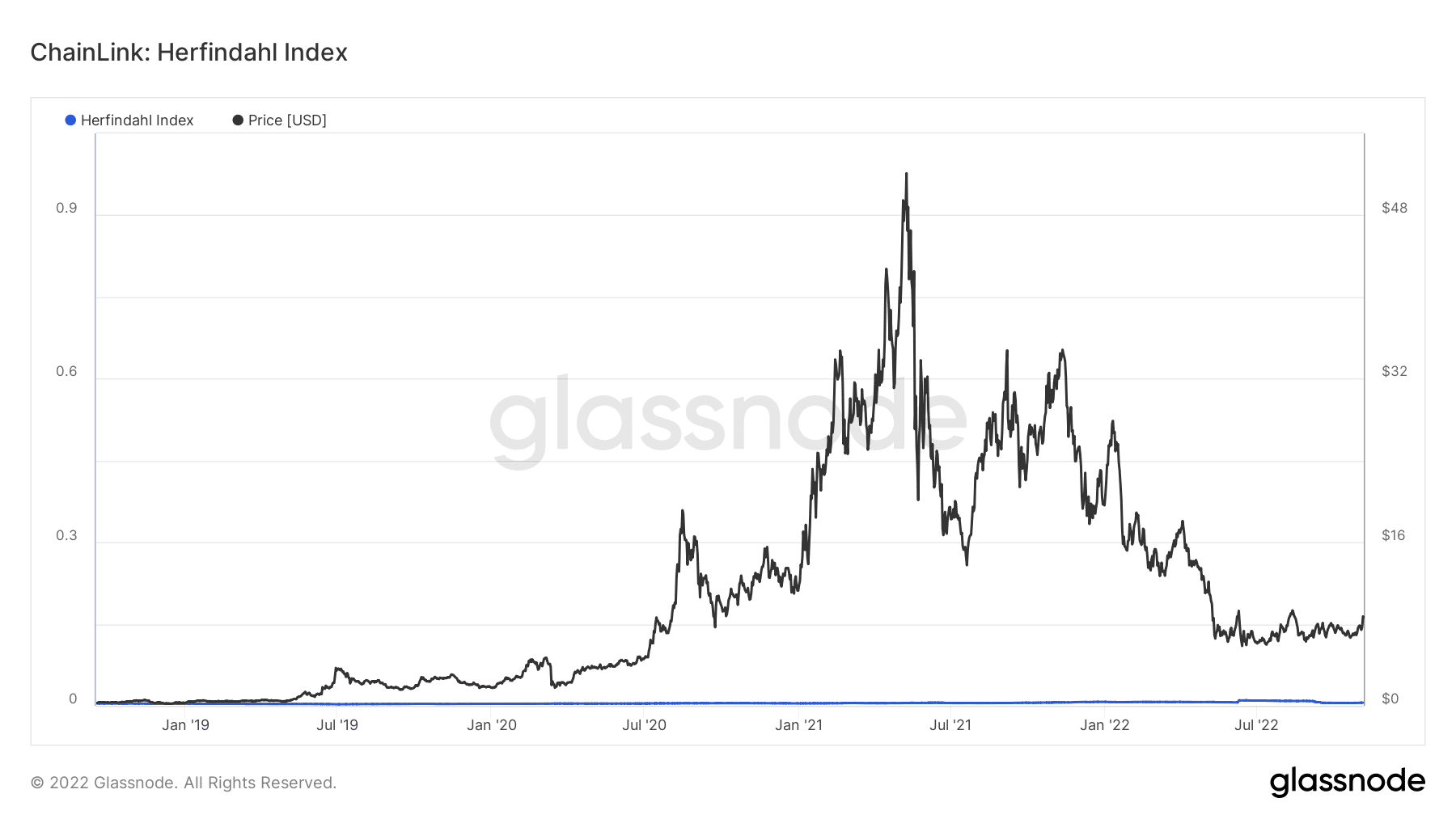 Furthermore, Glassnode revealed that Chainlik’s transfer rate had improved recently. With a rise to 9,290, this metric indicated that investors had had more successful non-zero LINK transactions than the first few days of November.

At press time, LINK was still down 85.1% from its All-Time High (ATH). Even so, attempting to inch closer to the highest point will require more uptick from these metrics. 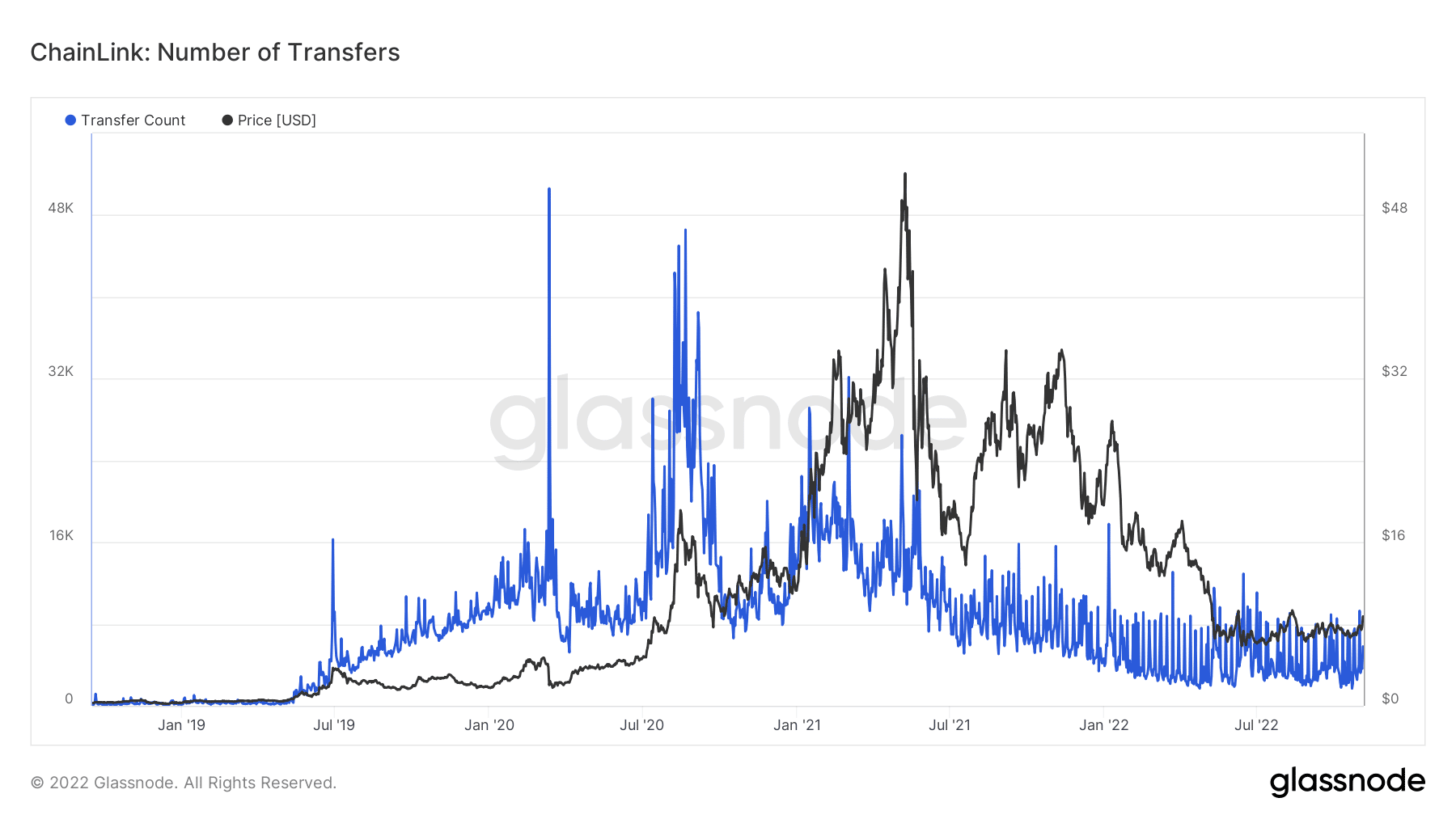 Lebanese buy groceries with USDT and mine crypto, as their country’s financial system has collapsed

This Technical Set’s LINK Up to 10% Gains