Ethereum to lead bullrun to $2,000 in coming weeks

in Crypto News
Reading Time: 4 mins read
A A

The world’s second-largest cryptocurrency Ethereum (ETH) has once again come on investors’ radar as it shoots past $1,600 levels during last week’s rally. Over the last week, the ETH price has appreciated by 20 percent shadowing Bitcoin’s 7 percent gains by nearly three times.

This has been Ethereum’s biggest weekly gain since July 2022 wherein it once again outperforms industry leader Bitcoin. Last month in mid-September, Ethereum transitioned to a Proof-of-Stake (PoS) consensus model replacing miners with validators.

Interestingly, Ethereum’s net issuance aka its inflation rate has dropped from 3.6 percent to nearly 0 percent. However, data from IntoTheBlock shows that Ethereum’s net issuance has actually dropped under zero. which means that Ethereum has turned deflationary, a coin whose supply reduces over time instead of increasing. This shortage in ETH supply could drive the ETH price higher going ahead.

The recent price rally has once again triggered the debate about ETH outperforming Bitcoin (BTC). On-chain data provider Santiment reports that while the ETH price is making solid gains, its address activity has been on a decline. It adds:

Ethereum’s price dominance over #Bitcoin and most of #crypto has continued as October is coming to a close. This has come following a spike in new $ETH addresses created. Address activity will likely need to recover for a confident continued rally. 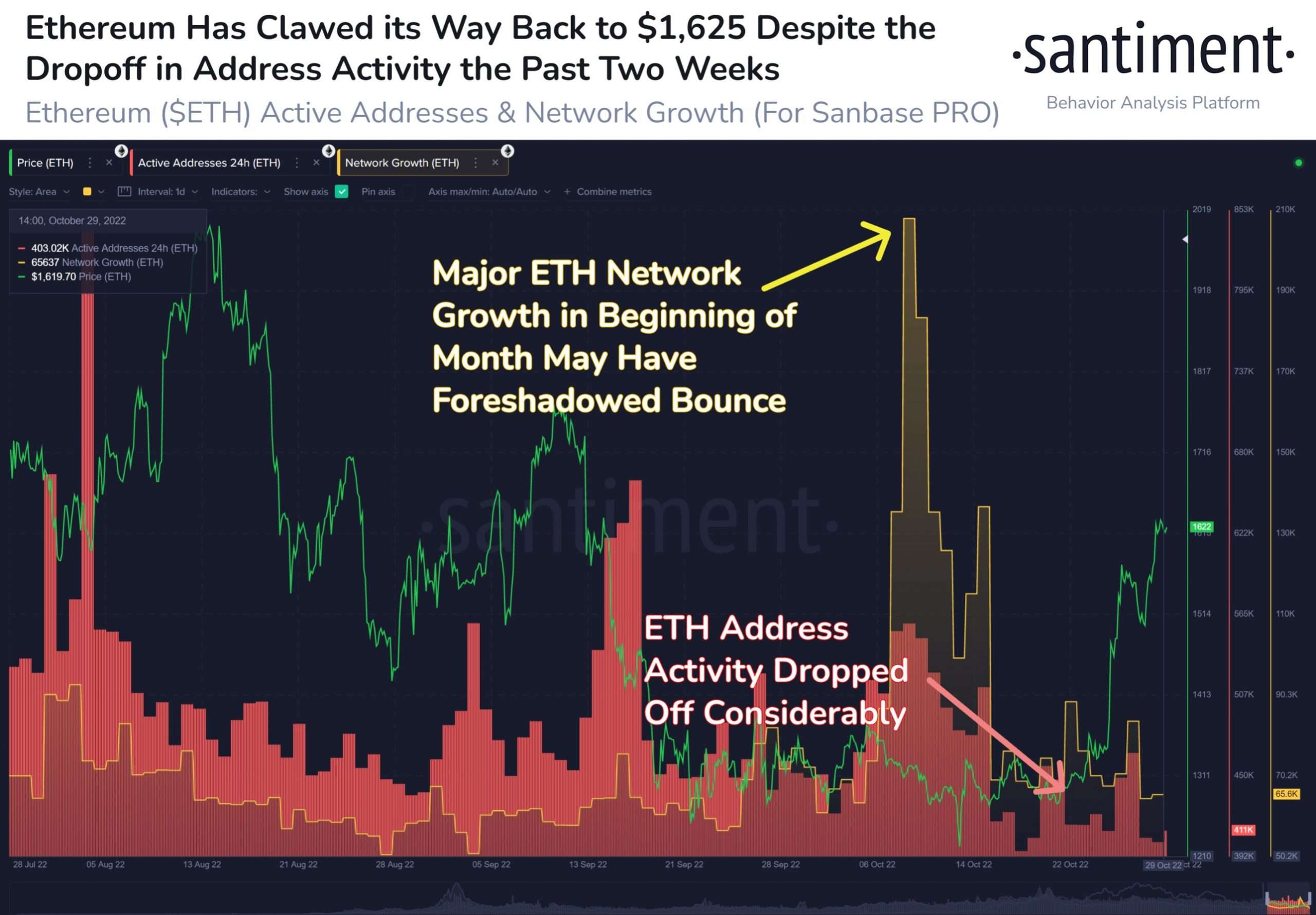 As per historical patterns, Bitcoin has relatively outperformed other altcoins during bear market cycles. This is because altcoins tend to enter a deeper correction in the bear market as investor money moves into Bitcoin. When it comes to adverse market conditions, Bitcoin holds the largest trust badge.

But some market analysts believe that Ethereum will continue to outperform Bitcoin amid this current transition to PoS. Also, with the ETH burn mechanism, the falling supply with rising demand is likely to drive prices higher. Speaking to CoinDesk, Josh Olszweicz, head of research at digital asset fund manager Valkyrie Investments, said:

“Ether may continue to outperform bitcoin as ETH’s annual issuance continues to fall rapidly. Therefore, thanks to the transaction fee burn mechanism, any increase in on-chain activity should bring Ethereum firmly into deflationary issuance territory and may have a substantial outsized effect on Ethereum’s price”.

He also believes that an increase in Ethereum network usage will tilt the demand-supply equation in favor of Ethereum (ETH). Since August 2021, more than 2.6 million ETH worth $8.65 billion has moved out of circulation.

A lot of sidelined capital is more attracted to ETH storyline than BTC at the moment. I expect ETH to maintain lead over BTC, as ETH’s deflationary nature will slowly be felt over time. Bitcoin would continue to face supply overhang from miners (more of a consistent drip of supply as opposed to large blocks) with bitcoin price here [around $20,000].

If this happens, the ETH price could rally even further by another 20 percent from the current levels and cross $2,000 in the near term.

The five spookiest stories in crypto in 2022

Walmart China usage of VeChain explodes in November – Will it drive VET price to $1?

Cardano Is ‘Head and Shoulders’ Above Ethereum, Polkadot and Other Crypto Assets in One Metric: Santiment