Singapore suspended a crypto exchange platform after it promoted an “Army Coin,” which is named after the followers of the phenomenal K-Pop group, BTS.

It comes after the cryptocurrency exchange firm, Bitget, figured in a dispute with the agency of the South Korean boyband for promoting the said token.

Now, the Monetary Authority of Singapore has taken action by outright suspending the crypto exchange firm in the country.

As per the report by Bloomberg, users of the Bitget in Singapore could no longer access both the app and website of the crypto platform. On top of that, the exchange also consequently removed the logo of the regulator in the country from its platforms.

The crypto platform, Bitget, which is a sponsor of the Italian football team Juventus, not only promoted the Army Coin.

It further touted that the said token being exchanged in its platform will provide financial support to the members of the South Korean boy band group.

Last Oct. 29, the K-pop agency behind the phenomenal group BTS, Hybe, issued a statement denying any links to the emerging Army Coin crypto that was listed on a Singapore-based crypto exchange, according to the news story by Straits Times.

Hybe further pointed out that the crypto firm is using the photos of the K-pop group to promote the Army Coin without any prior talks with the agency.

The agency behind BTS also warned the followers of the massively popular boy band group that some folks are also spreading false information, saying that the Army Coin is collecting profit for the K-pop group.

As such, Hybe went on to urge those who will be victimized by the crypto named after the followers of BTS to get in touch with the authorities. 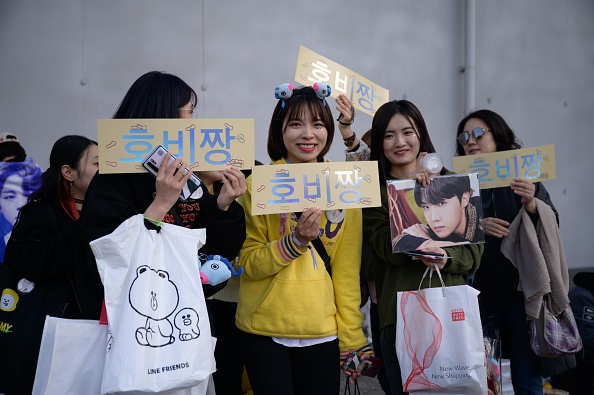 (Photo : by ED JONES/AFP via Getty Images)
In a photo taken on October 29, 2019, fans of South Korea’s BTS K-pop group pose for photos outside the venue of the bands final concert of their world tour at the Olympic stadium in Seoul. – The BTS world tour which ran from August last year and ended on October 29 drew a total audience of more than two million at 62 shows in 23 cities, according to Big Hit Entertainment.

The agency precisely said that “anyone who suffered a financial loss (after purchasing the coin) should go to the nearest police station or report it to an investigative authority.”

Read Also: Among Us-Shaped Chicken Nugget From the Mcdonald’s BTS Meal Ends Bidding on eBay at $99,997 – Another Listing Appears!

Meanwhile, the crypto exchange that listed the Army crypto, Bitget, explained after the statement of Hybe that it did not create the said coin.

Instead, Bitget said that it is only a trading platform, which lists cryptocurrencies created by other parties.

That said, the crypto exchange platform said that it would not take responsibility for the Army Coin.

However, Bitget assured its users that the firm would be observing the Army Coin, adding that crypto in nature is definitely an extremely volatile investment.

Elsewhere, another South Korean pop culture-inspired crypto emerged previously, known as the Squid Game Token. Later on, it ended up becoming a scam after its owners left.

This article is owned by Tech Times