A Chinese scammer fooled a businesswoman into falling for his investment scam. Based on the statement of the victim, it seems like she developed a connection with the thief upon being told that he is handling an orphanage.

(Photo : Photo by China Photos/Getty Images)
A Chinese man identifies a new issued 100 yuan note with an old one issued in 1999, at a bank on August 31, 2005 in Shanghai, China. Authorities issued new yuan notes today that largely resemble bills in circulation but with new marks meant to foil currency counterfeiters. New 100, 50, 20, 10 and 5 yuan notes, as well as a 1 jiao coin (10 Chinese cents).

Meanwhile, her daughter also shared his point of view. The businesswoman’s child, who only wants to be known as Ms. Ong, said that she already knew what her mother is getting into.

She said that although she already warned her parent, the victim still ignored her. Because of the mother’s negligence, the scammer was able to steal a total of $568,000.

“I told my mother to be careful but she was confident, headstrong, and had 100 percent faith in her contact. It was obvious it was a scam,” said Ms. Ong via The Straits Times’ latest report.

The victim, who wants to be addressed as Ms. Sophia, said that she met the man via WhatsApp. However, she actually didn’t know how the Asian guy was able to acquire her contact information, which is already a red flag. 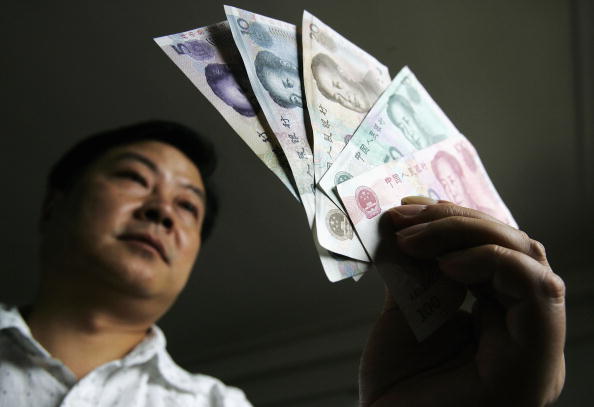 (Photo : Photo by China Photos/Getty Images)
A Chinese man displays new issued yuan notes at a bank on August 31, 2005 in Shanghai, China. Authorities issued new yuan notes today that largely resemble bills in circulation but with new marks meant to foil currency counterfeiters. New 100, 50, 20, 10 and 5 yuan notes, as well as a 1 jiao coin (10 Chinese cents), were available from the People’s Bank of China.

Because of the guy’s kind-heartedness and knowledge when it comes to investment, she immediately trusted him. The businesswoman added that she actually saw no sign of a scam.

What made her trust the Chinese scammer, even more, was that the guy claimed that he ran an orphanage with 40 kids in Chongqing. After sharing some personal things, they started to talk about investments, such as properties.

If you want to know more details about this latest investment scam, you can view this link.

Money Sense explained that there are various hints when it comes to investment scams. In the case of the Chinese man above, the guy used a method that involves a personal connection with his victims.

On the other hand, here are the following common signs that you are actually entering an investment scam:

In other news, Google ads are now being used by crypto scammers. Meanwhile, a 17-year-old crypto scammer created a fake website to fool victims.

For more news updates about scams and other malicious activities, always keep your tabs open here at TechTimes.

This article is owned by TechTimes

Kraken to join list of exchanges launching a NFT marketplace

Crypto Narratives and the Bitcoin Anti-Narrative

Scare Tactic Scam is Making the Rounds in Massachusetts

SOL Price Prediction: Solana is up 156%, SOL Might Be Set to Make Another Set of Millionaires