5 Altcoins to Invest in For High Returns During Altseason 2022

in Blockchain
Reading Time: 12 mins read
A A

There are thousands of cryptocurrencies to invest in other than bitcoin, but with so many altcoins to choose from where do you start?

We are here to help and have chosen 5 altcoins to invest in during altseason 2022, based on those that have the best potential return on investment balanced against least risk of loss of capital.

But before we move on, let’s define exactly what we mean by “altcoin”.

What is an altcoin?

Cryptocurrencies other than bitcoin are called altcoins. The first and largest cryptocurrency by market capitalisation is bitcoin, and altcoins are alternatives to bitcoin. In the years immediately after 2009 when bitcoin;’s genesis block was mined, there were only a few altcoins, with litecoin the first real contender.

Today the altcoin market is comprised of many sectors, with each providing different value when set alongside bitcoin – in other words they do something different to bitcoin or better.

By the way, if you are interested in the red hot non-fungible tokens (NFT) sector, check out our  how to buy NFTs guide and see the write up on MANA below.

So we can think of the altcoin market as cryptocurrencies that are similar to bitcoin in as far as they use blockchain technology, but, with the exception perhaps of those designed specifically to be used as currencies, differ radically from bitcoin. Just as there are many different types of altcoins, there are also a multitude of protocols that determine how the networks work.

What is the alt season?

There are periods in the market when bitcoin dominance falls. This means that the proportion of overall market capitalisation accounted for by bitcoin shrinks as the relative values of altcoins rise.

When bitcoin has been on a strong run which has seen its dominance increase dramatically, it can catch the eye of potential investors and traders who fear that the price of bitcoin is too “toppy”, such that the price has become overextended.

These investors instead look to find better risk-reward opportunities among altcoins: such periods of market activity are known as the altseason and describe a situation of relative outperformance by altcoins relative to bitcoin.

With the market currently pulling back from all time highs, and bitcoin in bear territory having fallen more than 20% from its high, 2022 promises to provide an opportunity to buy top altcoins at highly attractive prices.

Online gambling has increased dramatically over the last five years or so because of the ease of access that online platforms provide. It’s no wonder that these highly profitable platforms and websites have been growing exponentially.

Riding on this momentum is a new blockchain project, LuckyBlock that envisions a worldwide lottery where players use Blockchain protocols.

LuckyBlock’s blockchain-based lottery will run on the Binance Smart Chain. It decentralizes gambling services that are not limited by geographical location or tied to local financial systems.

LuckyBlock’s decentralized betting platform will focus on delivering fairness and full transparency in gaming. It aims to achieve this by designing a lottery where every player has better win odds, while providing a solid investment strategy for token holders when contributing to the community.

At the moment, centralized and offline lotteries are expensive to run. LuckyBlock seeks to solve some of the problems experienced by traditional offline and centralized lotteries by saving on operational costs, hence availing more money for prizes.

In addition, with a blockchain-based lottery, you don’t have to worry about losing your ticket as everything is recorded on the decentralized blockchain ledger.

The lottery platform will be ready to go live during the first quarter of 2022 (Q1 2022). The LuckyBlock (LBLOCK) token has been audited by Solid Proof: https://solidproof.io

How to take part in the LuckyBlock Presale

The LuckyBlock Token pre-sale was launched on 1 December and is set to go on until February 1, 2022. You can find out more information on the presale by visiting luckyblock.com.

You can also email the LuckyBlock team at [email protected] to get more information.

Get involved with LuckyBlock’s online community

You can be part of the LuckyBlock community on the following platforms: 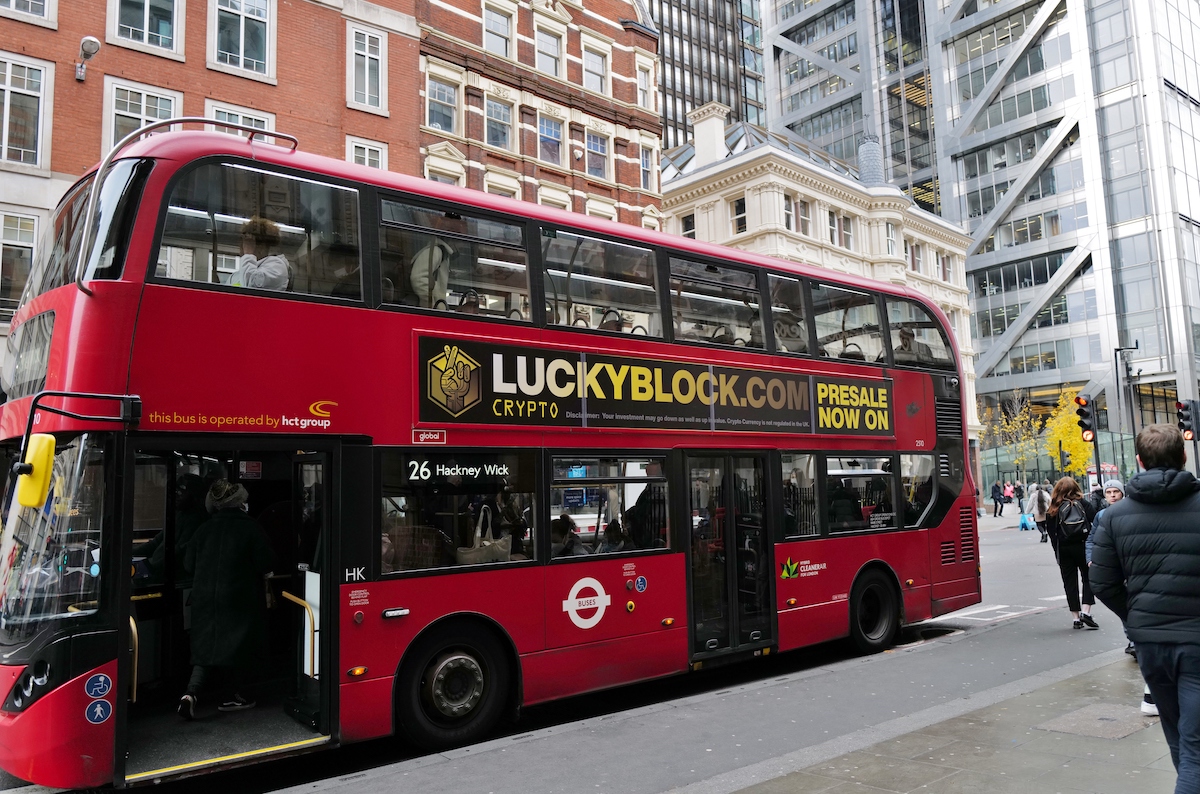 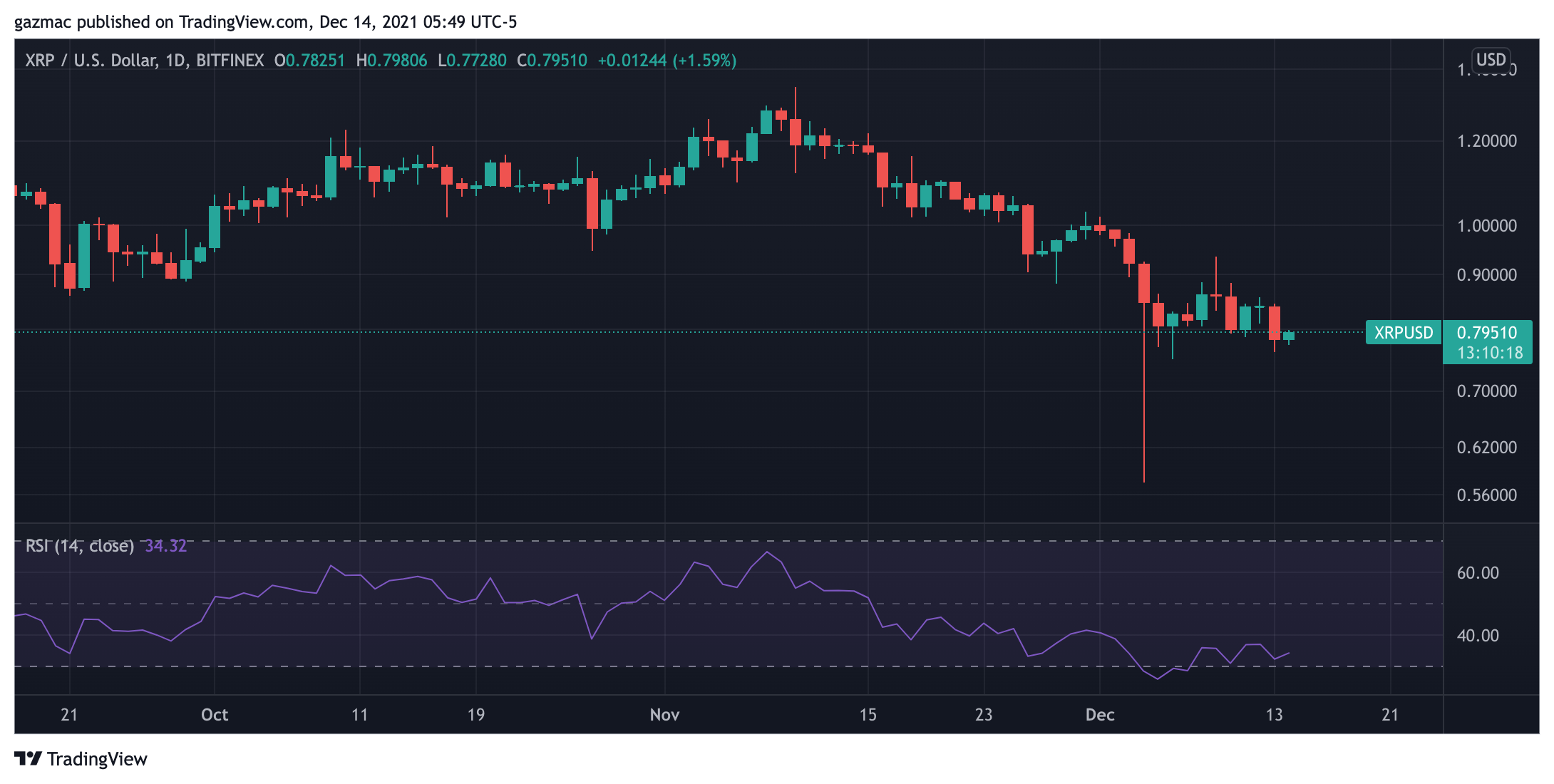 When it comes to alternative crypto use cases to bitcoin,  Ripple’s XRP has emerged as a key competitor. The coin was designed as a liquidity token for cross border payments. Ripple Labs, the company that issued the token, has built an ecosystem around  the coin in its efforts to partner with financial institutions, payments companies and consumers looking for cheaper ways of moving money around the world.

However, the promising technology and the interest in the coin attracted the attention of the US financial regulator, the Securities and Exchange Commission. The SEC has brought a lawsuit against Ripple charging it with conducting the sale of an unregistered security, but Ripple says XRP is a currency.

The court case is still at the wrangling over the parameters of the case and evidence discovery, but many observers believe that Ripple is in a strong position because of previous statements by SEC officials that at the least sent out mixed signals as to the nature of XRP and other crypto.

If as expected Ripple wins the court case or comes to a settlement out of court, then the price of XRP will likely make up for lost time and rocket in value.

Even if the case is lost, it would still have the effect of clearing away the uncertainties that have held back the price, so either way, buying XRP at current prices could be a win-win. 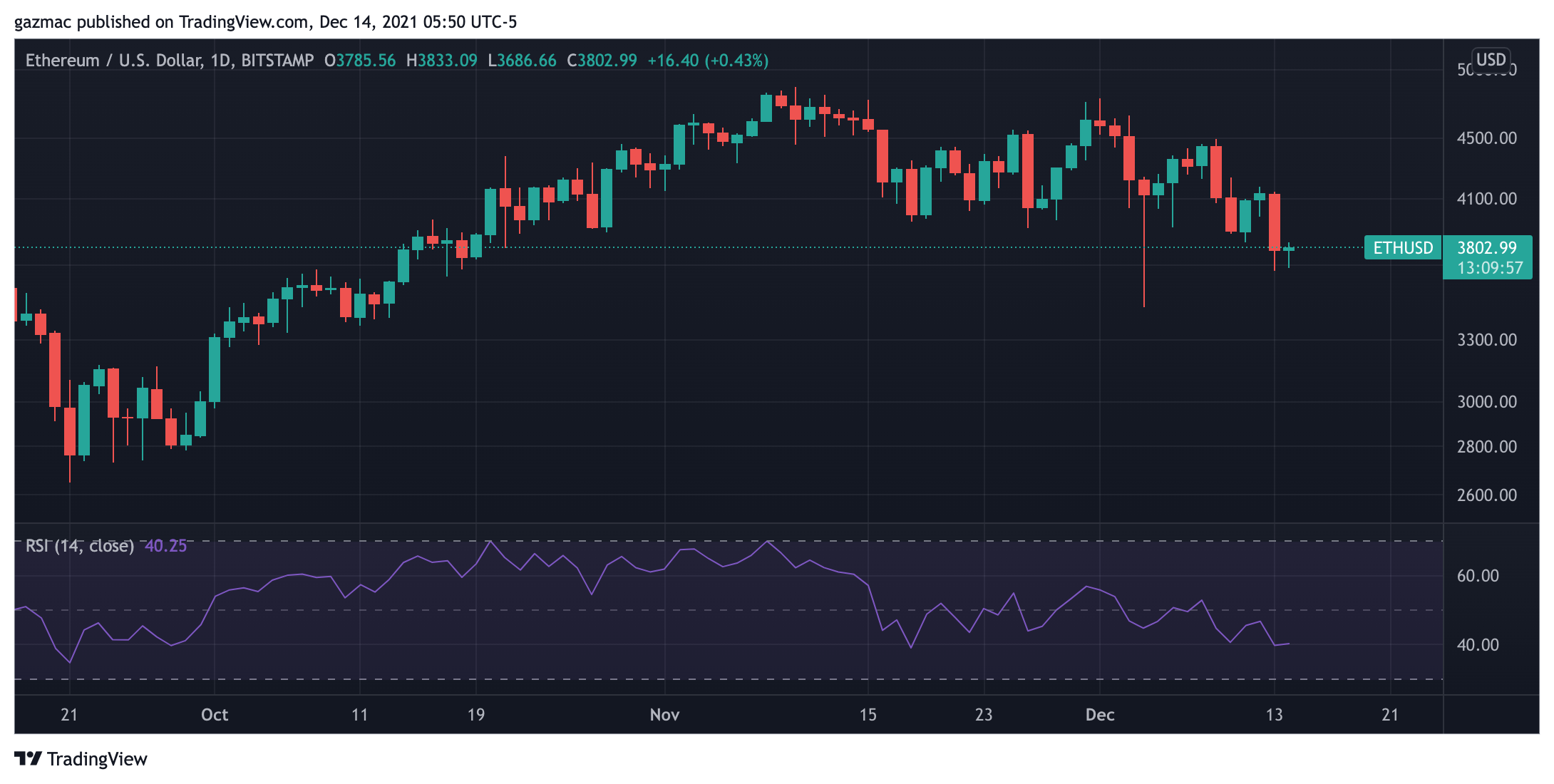 Ethereum is the second largest cryptocurrency by market capitalisation and is the dominant platform for running smart contracts. Smart contracts are executable computer code running on a decentralised network of computers. In Ethereum’s case this is known as the Ethereum Virtual Machine, which can be thought of as a giant decentralised computer. Smart contract automate all manner of economic processes, be they the business logic for decentralised finance or the code needed to run a trustless social network with no centralised trusted third party running it.

Ethereum is also used for launching new cryptocurrencies that run on top of the Ethereum blockchain. Today there are hundreds of coins with substantial network activity built on top of Ethereum.

Ethereum’s success has meant that this year it has outperformed bitcoin in price terms over the past year by 165%. Ethereum has also made progress in addressing the problems of its success, namely the expense and slowness of conducting network transactions.

Ethereum is moving from its current proof of work protocol to proof of stake, which will increase the throughput of transactions from around 15 transaction per second to thousands. The migration to Eth 2.0, as it has been dubbed, will take place by the end of next year or perhaps early in 2023.

With Eth 2.0 moving forward and DeFi and NFT adoption mushrooming, Ethereum provides investors with an investment opportunity that is proving its value through network adoption right now. And when Eth 2.0 lands, Ethereum could end up being more valuable than bitcoin. 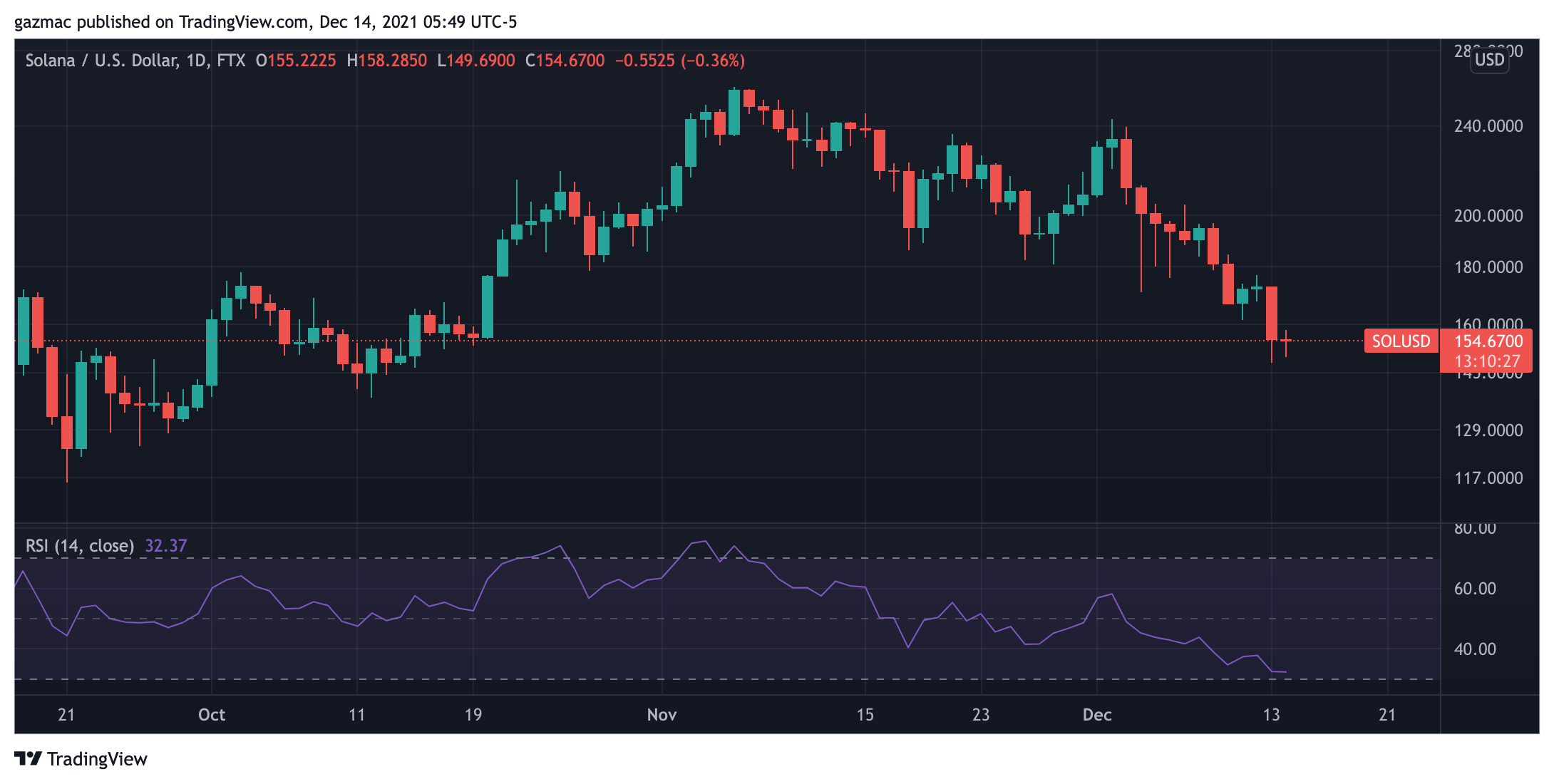 Solana is sometimes referred to as an “ethereum killer”. Solana is a so called Layer 1 smart contract platform. What does this mean exactly? Let’s go back to bitcoin, or even ethereum. Both have scaling problems, which means they congested and expense to transact on when activity spikes.

They are also limited in how many transactions they can push through the network, hence the need to ration resource allocation with fees. A number of “layer 2 ” solutions have ben developed for both bitcoin and ethereum to address these scaling problems.

As the name suggests, these are protocol’s that work in conjunction with the underlying blockchain but speed up transactions by executing and verifying transactions off chain and then securing those transactions in batches on the main chain.

Layer 1 protocols by contrast are built from the get-go with scaling solved. Solana tps is up to 65,000, which blows ethereum’s 15 tps out of the water.

Not surprisingly then, the platform has been attracting developers and projects. One of the most high profile is the trading system Pyth Network that has been set up by Chicago trading firms to deliver real-time on-chain market data at speed. Pyth is an Oracle service. Oracle are how smart contracts interact with real-world events in order to trigger actions by the smart contract.

The current slump in price in the crypto market presents a buying opportunity. Investors should begin to start accumulating SOL with pound cost averaging, which means investing a regular affordable amount in order to smooth returns. 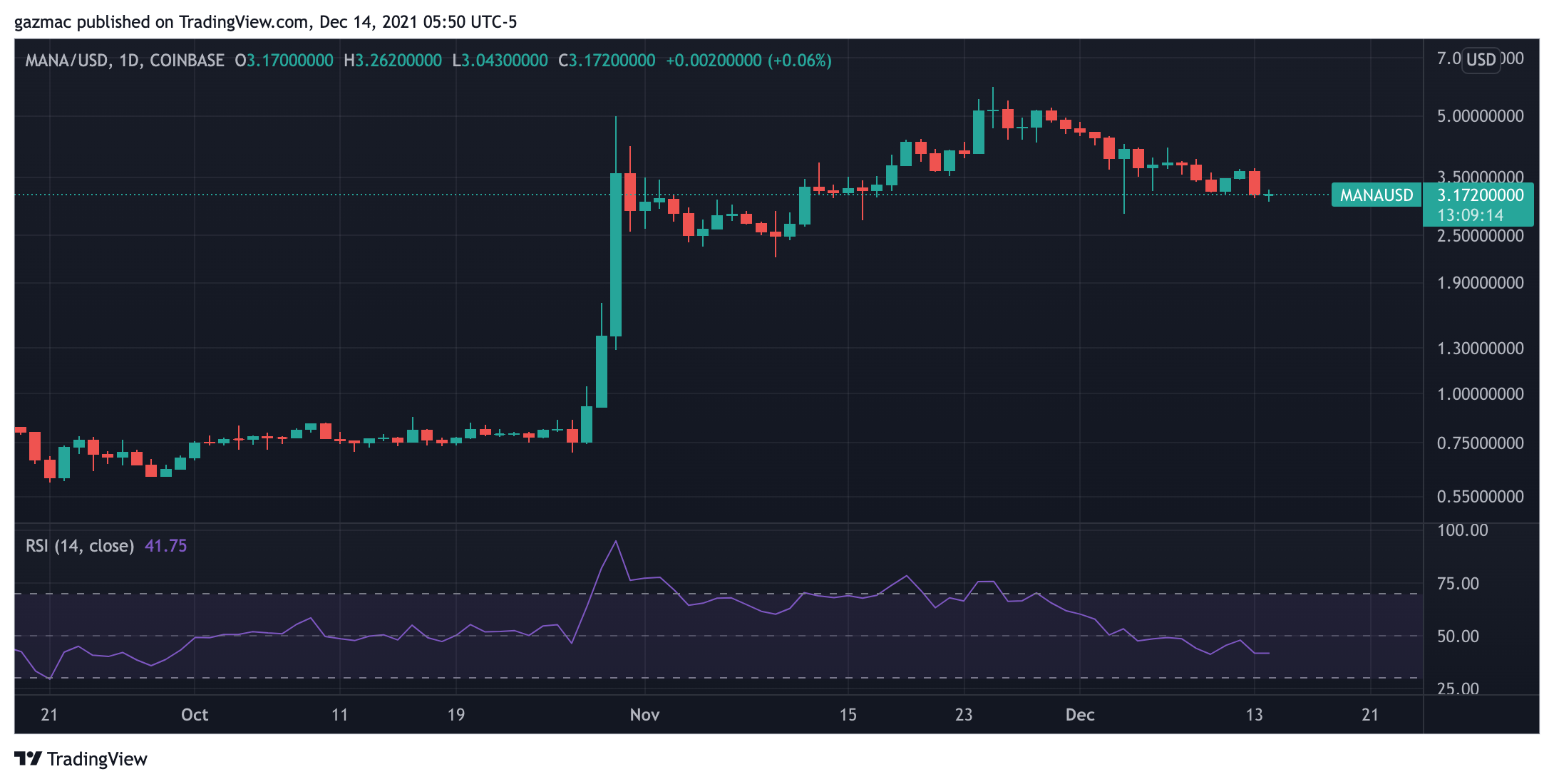 Decentraland is one of the great survivors from the 2017 bull market and is currently thriving as one of the pioneers of what has now come to be known as the metaverse.

Decentraland is a virtual world in which users can buy virtual real estate and interact with each other with avatars. Users by land with the LAND token but it is the MANA token that is the utility token of the network.

We can think of the metaverse as a space in which the real and virtual worlds meet. In the case of Decentraland, you can hook up to the network with the Metamask wallet and travel around the virtual world, drop in on art galleries, music events you name it, all built as unique NFT assets. As these events and other activities grow in popularity, so too will the business opportunities.

Metaverse to be a trillion dollar total addressable market

The metaverse will become spaces where we work and play and exchange goods and services, which is why Facebook holding company Meta Platforms is investing $10 billion a year into building its version of the metaverse.

The challenge will be to connect up all these worlds in an interoperable way, and that’s where public blockchains and non fungible tokens (NFTs) come in.

Decentraland is a hundreds of billions of dollars opportunity. The MANA price is currently 45% down from its all time high, representing an excellent entry point for an investment in what could become a new computing paradigm.

This paradigm shift could be as profound as the advent of the graphical user interface, the hypertexts of the world wide web and the mobile-centric touch interface revolution ushered in by Apple’s iPhone.

Crypto market in the red, US stocks sink as Omicron fears return

Crypto market in the red, US stocks sink as Omicron fears return

How Banksters Is Revolutionizing The World Of Crypto Gaming